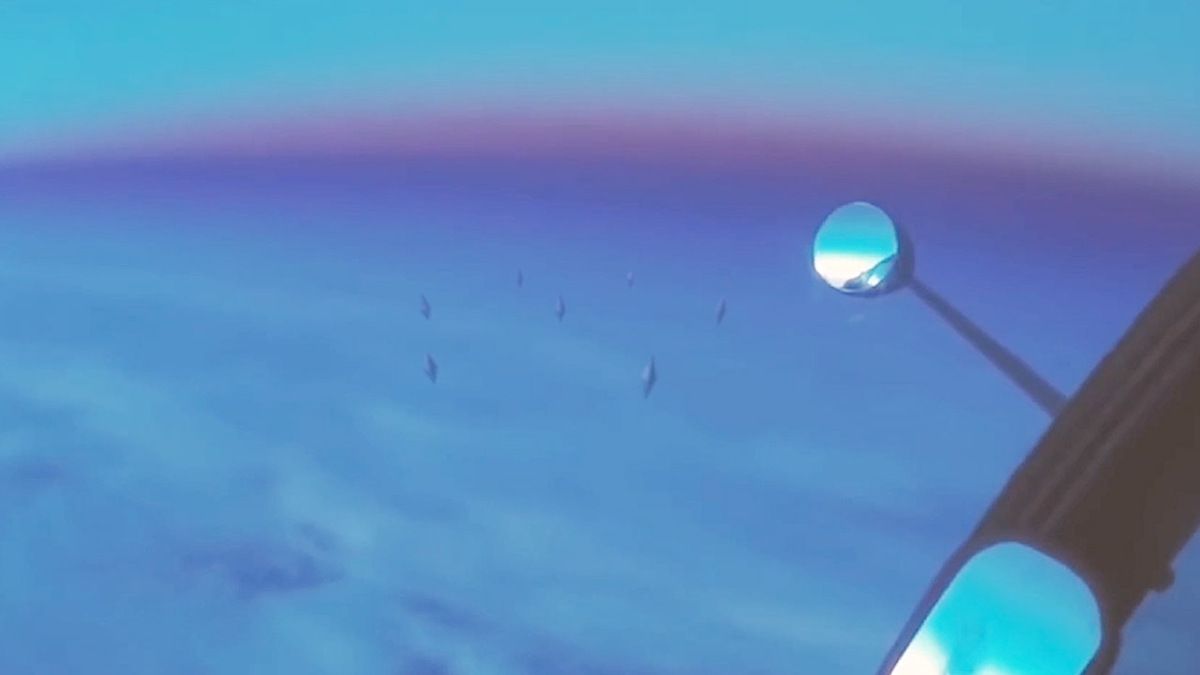 In 2005, astronaut Leroy Chiao, commander of the International Space Station, reported a UFO encounter during a space walk.  He and a colleague were installing navigation antennas when something unusual caught Chiao’s eye.  Below him in the Earth's atmosphere he saw a line of lights that looked like "an upside-down question mark."

One non-UFO explanation for Chiao’s sighting offered by skeptics is that Chiao simply saw the bright lights of a fishing boat hundreds of miles below him.  Of course, those would have to be some pretty insanely powerful fishing lights to be seen all the way in outer space - and why Chiao didn't see the lights of other boats all over the ocean has never been explained.

One of the most well-known early UFO encounters involved Lieutenant George F. Gorman of the North Dakota Air National Guard, who said he had a twenty-seven minute "dogfight" with a UFO in the skies above Fargo.

On the night of October 1, 1948, Gorman was preparing to land his P-51 when he saw a light aircraft outlined plainly about 500 feet below him.  He called the tower, but the operator there told him they knew of no other planes in the area.

Gorman informed the tower that he was going to investigate.  He closed to within about 1,000 yards and took a good look at the object.

It was about six to eight inches in diameter, clear white, and completely round without fuzz at the edges. It was blinking on and off. As I approached, however, the light suddenly became steady and pulled into a sharp left bank. I thought it was making a pass at the tower.

Gorman says the light suddenly charged him. When collision seemed imminent, the object suddenly shot straight up into the air in a steep climb-out, disappearing overhead. Gorman again attempted to pursue it, but his plane went into a power stall at about 14,000 feet, and the object was not seen again. It was then 9:27 pm.

In the airport control tower, traffic controllers Lloyd D. Jensen and H. E. Johnson also saw a strange light near the airfield.  In a statement to Major D. C. Jones, commander of the 17th Fighter Squadron at Hector airport, Gorman said he was convinced that there was "thought" behind the maneuvers.

George F. Gorman retired from the Air Force in 1969 with the rank of Lieutenant Colonel and settled in Texas.

Even the original Mercury astronauts had strange encounters in outer space.  Major Gordon Cooper (who was later famously played by actor Dennis Quaid in the blockbuster film The Right Stuff) had more than one UFO encounter.

The most well-known one took place on May 15, 1963, when he was shot into space in a Mercury capsule for a 22-day journey around the world. During the final orbit, Cooper told the tracking station at Muchea (near Perth, Australia) that he could see a glowing, greenish object ahead of him that was closing fast on his spacecraft.  The UFO was picked up by Muchea's tracking radar - so there is no doubt it actually existed.

Cooper's sighting was reported by NBC, but when Cooper landed, reporters were told that they would not be allowed to question him about the UFO sighting.

Major Cooper later testified before the United Nations on the subject, saying:

"I believe that these extra-terrestrial vehicles and their crews are visiting this planet from other planets... Most astronauts were reluctant to discuss UFOs... I did have occasion in 1951 to have two days of observation of many flights of them, of different sizes, flying in fighter formation, generally from east to west over Europe".