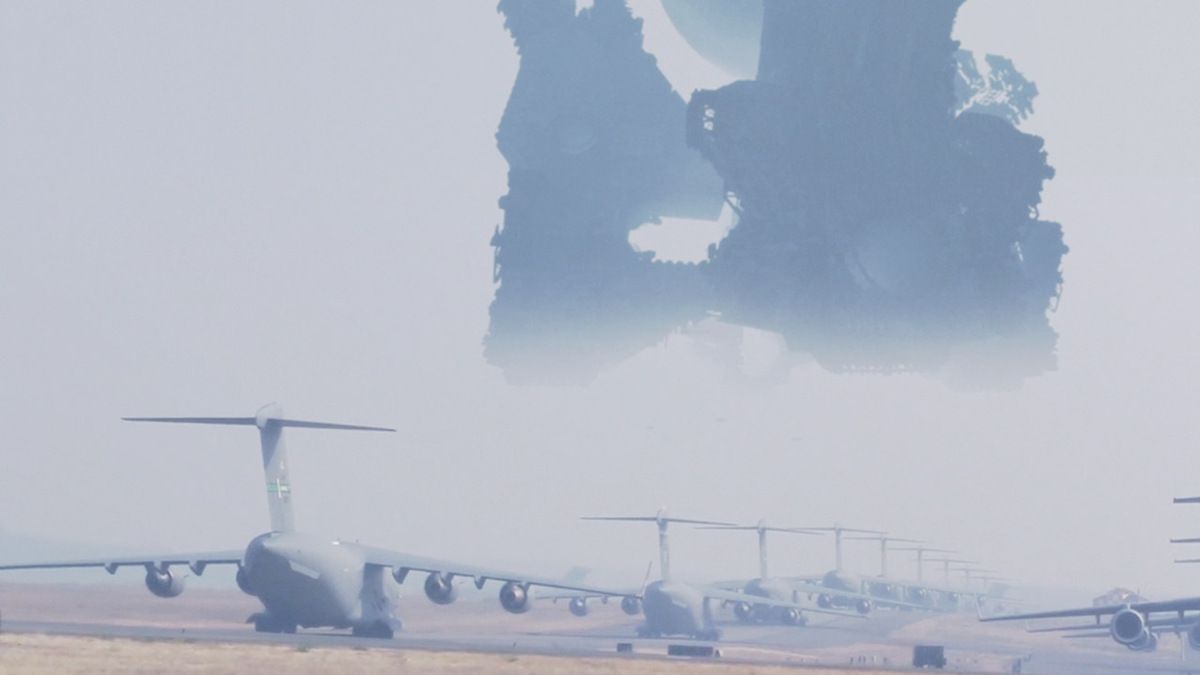 In 2015 A CHILDREN'S author claimed to have been abducted by aliens at the notorious Area 51 military base and warned by the crew of a UFO that landed at UK paranormal hotspot Warminster that the world could end.

Mike Oram who has penned the kids' books The Strange World of Jimmy Hayes and The Zen of Ben claimed he and wife Fran Oram were "taken" when they visited the mysterious US military top secret base Area 51 in Nevada.

Mr Oram told a conference to commemorate the 50th anniversary of the Warminster mass UFO sightings he was a so-called alien contactee.

In 1965 the Wiltshire country town made global headlines and became a destination for UFO hunters following a huge amount of sightings of flying saucers, lights and eerie noises that "stopped cars" and "killed birds".

Mr Oram, a speaker at the commemorative event, said: "I have had contact since I was a child and it still goes on."

The Cockney claimed to have a "space brother" an alien who watches over him like the so-called "spirit guides" which psychic mediums claim to contact.

He said he and his wife once saw an enormous "UFO mothership" on the border of Essex and London.

But the musician and landscape gardener claimed the most terrifying experience they suffered was after visiting the outskirts of Area 51 in the Nevada Desert during 2004.

Area 51 is a top-secret US military base, where UFO conspiracists claimed the authorities conceal evidence of aliens visiting Earth from the public.

Mr Oram said their "ordeal" began after they approached the edge of the top security base and photographed it despite warning signs prohibiting this.

They were then allegedly tailed by a truck which mysteriously disappeared in the desert after they thought it shot at them, puncturing a tyre.

He claimed to have "lost" about two hours, and later under regression - when "an abductee" is hypnotised in order to remember the experience - discovered the pair were taken through by sinister military-dressed beings through a "portal" to another dimension and experimented on in a bizarre medical suite.

But his space brother came at the eleventh-hour and ordered their captors return them to their vehicle.

Referring to his space guide, he told the conference: "They rescued us in Area 51 and it was so bad Fran said she would never ever set foot in America again."

The couple ended up at a mobile home park after changing the tyre, where a doppleganger of Mr Oram was staying next door.

He claimed to have gone missing for an hour after feeling sick with a ball of light above his head and then spent nearly three days sicking up white powder.

Under the subsequent regression, he claimed to discover he was taken on board an alien space craft where his space brother put him through a detox to save him from the horrific earlier abduction.

Mr Oram told the conference it was the only time he was abducted by malevolent beings, and that most of his "contact" has been with good aliens keen to use him as a conduit to warn the powers that be on Earth how to save the planet.

At Warminster, he claimed to have often seen lights and UFOs that would respond to torches flashing on and off and even fire down projectiles.

But sceptics claim alien abductiuon stories have no evidence to support them other than the anecdotes of the "abductee".

They also say that the memory loss blanks are nearly always filled in under so-called regression sessions.

Sceptic Carl Sagan told the Kidnapped by UFOs website: "There's no scrapings, no interior photographs, no filched page from the captain's log book. All there are are stories.

"There are instances of disturbed soil, but I can disturb soil with a shovel.

"There are instances of people claiming to flash lights at UFOs and the UFOs flash back.

"But, pilots of airplanes can also flash back, especially if they think it would be a good joke to play on the UFO enthusiast. So, that does not constitute good evidence."

US UFO researcher Philip Klass, who investigated alleged alien abductiuon cases for more than 30 years and concluded there is "not a shred of evidence"

He wrote on the same website: "Missing time is supposed to be another mark of abduction.

"Heavens, I experience missing time every time that I look at my watch and say 'My goodness, it's 2pm, I thought it was only around noon'. It is automatic. It is routine.

"If aliens are abducting thousands or millions of Americans, and if they're putting implants in many of them.

"All it would take would be one little micro electronic, or one unusual device that we could say 'this could not have been made on this Earth'. And that would be the evidence that would convince even me.

"But so far, they cannot come up with any scientifically credible evidence."