Arizona is a popular tourist destination for intergalactic visitors. Why, it seems like only last month that a Sky Harbor Airport employee spotted a massive V-shaped object hovering off the ground, light emanating from the bottom.

The state consistently ranks among the top areas for reported UFO sightings. In fact, there have been more than 3,000 recorded sightings in Arizona since 1950, according to the Davenport, Washington-based National UFO Reporting Center.

And it isn't just the widely reported 1997 mass sighting of the so-called Phoenix Lights. Historically, some of the strangest, unexplained alien encounters occurred right here in Arizona.

The Rhodes "Disc" Photos (1947)
On July 7, 1947, a 30-year-old Arizona man took one of the first and most famous photos of flying saucers in the skies over Phoenix.

It was about four in the afternoon when William Rhodes stepped out of the back door of his Phoenix workshop after a summer thunderstorm. The sound of an approaching jet caught his attention, but when he looked to the sky, he saw nothing. Seconds later, an elliptical gray disk appeared, hovering silently above the horizon toward the northeast. Rhodes later estimated it to be 20 to 30 feet in diameter, with a cockpit and a tail. The object hung about 5,000 feet above the ground before suddenly spiraling downward, dropping 2,000 feet in seconds. Rhodes ran inside, grabbed his camera, and got off two shots as the disc flew upward toward the clouds. The craft took off at speeds he estimated to be between 400 and 600 miles per hour, then disappeared over the western horizon.

Rhodes told a local reporter in 1998 that after his photo was published in the Arizona Republic, a government agency had asked to "borrow" the negative but never brought it back.

"That is the very first picture of a cylinder-shaped UFO ever — that's really the significance behind that sighting," UFO hunter Jeff  Willes says. "Plus, that was one of the first Arizona sightings to be captured on photograph." Marana Air Base Sighting (1952)
While waiting for a radio transmission from one of his students, a pilot instructor at the U.S. Air Force base at Marana (now Pinal Airpark), northwest of Tucson, noticed a bright star in the morning sky at about 7:45 a.m. on April 3, 1952. The instructor didn't say anything about it, but soon two of his colleagues also pointed out the unusual mass hovering in place, according to published reports. Another pilot took off from the base in a plane to get a better look at the strange metallic object. About 45 minutes after the instructor noticed the UFO, it vanished. "It was real bright and shone like polished aluminum. I have been flying for 25 years and I have never seen anything like it," he said at the time.

There were no military reports about balloons or other craft in the vicinity. To this day, the incident remains unexplained.

The airbase sighting is among those listed in Project Blue Book, the air force’s infamous, top-secret UFO study, which compiled 12,618 sightings across the nation from 1947 to 1969. The 130,000-page report, which was recently declassified and made public, includes hundreds of reports of mysterious flying saucers and glowing spheres over Arizona.

"Project Blue Book was pretty much the government’s attempt to explain away the sightings," Willes says. "And for sightings they couldn’t find a way to explain away, they labeled them as 'unexplained' — like it was no big deal. And then they never told the public what they discovered."

The Phoenix Lights (1997)
As most Arizonans know, the otherworldly event that elevated Phoenix's prominence in the annals of UFO lore was the Phoenix Lights — one of the largest mass UFO sightings of all time.

On March 13, 1997, a string of glowing orbs hovered over Paradise Valley skies. For three hours the huge, V-shaped formation passed silently over a 300-mile corridor from the Nevada line through Phoenix to the northern edge of Tucson. The lights were witnessed by thousands and photographed by hundreds, who had been watching the skies that night to catch a glimpse of a passing comet. The military later claimed the wedge of lights was nothing more than flares dropped over the Valley during a training exercise.

But witnesses — including then-Arizona Governor J. Fife Symington III — were convinced they saw an otherworldly craft. "It couldn't have been flares because it was too symmetrical," Symington would tell Prescott Daily Courier reporter Leslie Kean 10 years later. "It had a geometric outline, a constant shape."

"Thousands of witnesses saw this V-shaped object that flew all across the state. There still hasn’t been a UFO sighting like that in UFO history." 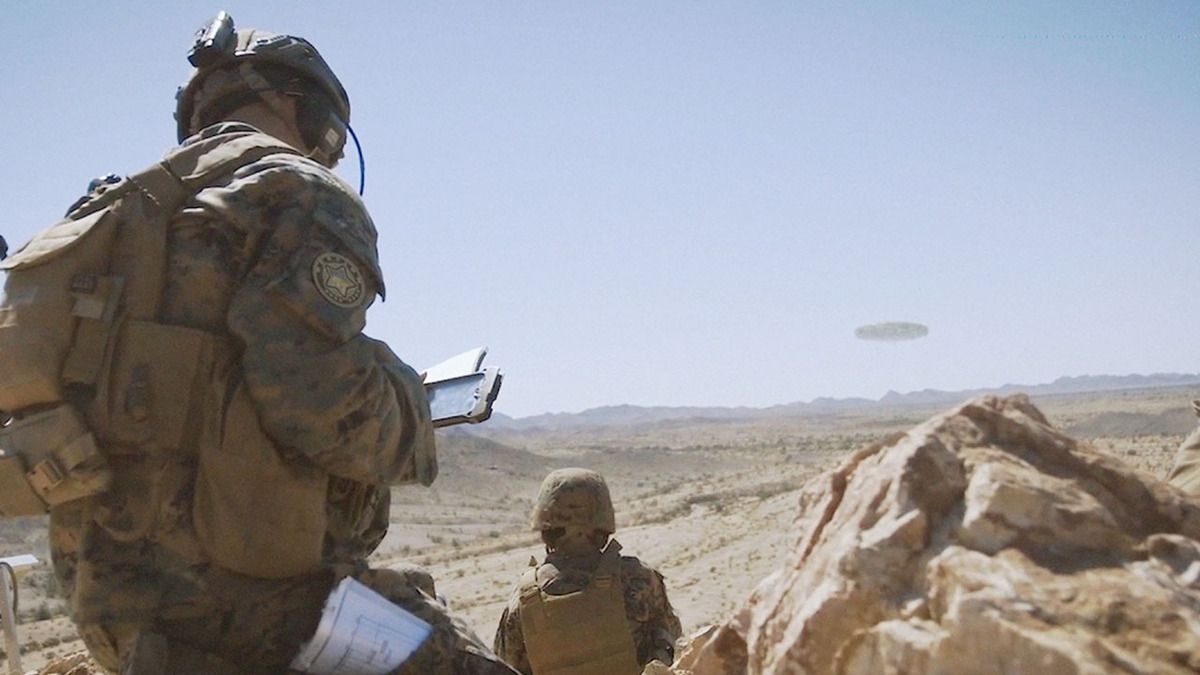