UFO hunters claim to have obtained video evidence that the U.S. Air Force is conducting secret late night tests of newly-acquired alien UFO technology at the Nellis Air Force Base, a notorious UFO hotspot near Las Vegas in southern Nevada.

Steven Barone, a UFO hunter who specializes in watching the Nellis Air Force Base in Las Vegas for evidence of alien and UFO activity, uploaded footage to his YouTube channel purportedly showing alien UFOs hovering in the night sky over the restricted test and training range area of the Nellis AFB.

The footage, shot on the night of November 15, 2016, from the backyard of his residence in the affluent Summerlin area of Henderson, Las Vegas in Nevada, was uploaded to YouTube on November 16.

Barone claims to have obtained the alleged evidence of clandestine UFO activity over the Nellis AFB using “night vision technology.”

A video shows evidence of heavy alien UFO traffic over the Las Vegas Valley, believed to have originated from the Nellis AFB and the Test and Training Range where the famous top-secret USAF Area 51 base is located.“I shot this video from my backyard in the Summerlin area of Las Vegas, Nevada, on the night of November 15, 2016,” the UFO hunter writes on YouTube.

Barone claims that the footage is entirely unprocessed.

The Tall Whites, according to UFO conspiracy theorists, signed a secret trade agreement with the U.S. government in the 1950s. The trade agreement required the Tall Whites to grant Pentagon access to advanced aerospace technology in exchange for certain mineral resources.

The alleged secret community of Tall White Aliens living in an underground base at the Nellis AFB includes alien scientists, engineers, and technicians who provide technical support to Pentagon aerospace black projects, according to UFO researchers.

UFO researchers claim that there is also a Tall White Alien trade delegation living secretly on the extensive grounds of the Nellis AFB.

Going by Waring’s speculation, the alien UFOs were probably given to the U.S. government by the Tall Whites who, according to UFO folklore and legend, have maintained a secret base at the Nellis AFB since the 1950s.

The aliens presumably gave the three UFOs to the U.S. government as part of the alleged trade agreement. 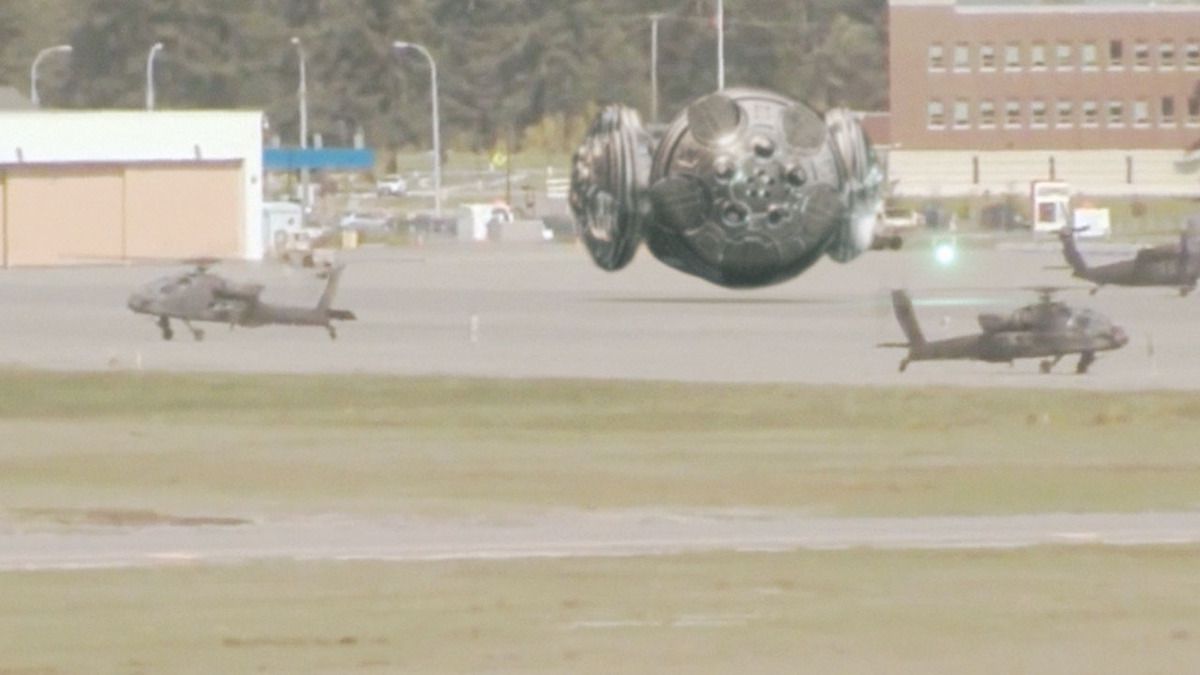 The suggestion that the U.S. government may have received alien technology from an advanced alien race is not entirely novel. It is claimed that the U.S. government has in its possession several alien UFOs stored in secret climate-controlled hangers. But it is believed that the UFOs were recovered from UFO crash sites, such as the famous site outside Roswell in New Mexico, where an alien flying saucer allegedly crashed in 1947.

Conspiracy theorists claim that the Roswell craft is being stored in secret air-conditioned hangers at several restricted facilities, such as Area 51 in the Nevada desert and Wright-Patterson Air Force Base near Dayton in Ohio.

It is also believed that government scientists and engineers have been working for decades to reverse-engineer the exotic and advanced propulsion technology of the UFO crafts.

Hall came forward in the 1980s, claiming that he met members of the Tall White community while he served at the Nellis AFB in the 1960s as a USAF weather observer.

“In 1964, when I was a weather observer at Nellis Air Force Base in Nevada, I witnessed interactions between the military and a group of mysterious tall, white, human-like extra-terrestrials,” Hall said.

“Their craft are capable of traveling faster than the speed of light because Einstein was wrong about relativity,” he added.

Tall White Aliens resemble humans so closely that they can participate in the Las Vegas nightlife disguised in coats and sunglasses to hide their pale white skin and large blue or pink eyes.