Dreamland is the code name for Area 51. Area 51 is a "secret" military base located about 90 miles north of Las Vegas, Nevada. It is also known as Groom Lake, named for the dry lake bed the military base is sitting on. The size of the base is six miles wide by ten miles long. Recently the Federal government has seized an additional 85,000 acres surrounding the base to keep observers at a distance.

Contained somewhere on the grounds is a large air base that the U.S. government will not discuss. It is considered so sensitive that only those who take an oath of secrecy for life are allowed in. Civilian contractors and others who work at the base are flown in every morning aboard unmarked planes with blacked-out windows. It is said that structures are built deep into the desert floor, with buildings going down thirty to forty stories below the surface.

The perimeter of the base is covered with ground sensors and listening devices to detect even the smallest intrusion. It is also heavily patrolled by armed guards from the Wackenhut Corporation, a very serious private security firm. These guys aren't your normal rent-a-cops that local concert promoters use. In short, they will kill you. End of story.

Area 51 was first opened in 1955 as a testing facility for the U-2 spy plane being developed by Lockheed Aircraft. Area 51 has since become a popular symbol for the U.S. government Alien / UFO cover-up. Area 51 is supposedly where recovered alien spacecraft are being tested and reversed-engineered to learn how they work.

This military base is so well known that every school kid in America recognizes its name. It has been a part of most UFO researcher's vocabulary for decades. Every military power in the world is aware of Area 51. As part of an international treaty called the "Open Skies Treaty," the United States Government is required to fly other countries over the base upon demand. The U.S. government has reciprocal privileges for their bases. Not only that, but Area 51 is not just a U.S. base, it is an international base being run by a consortium of many countries. 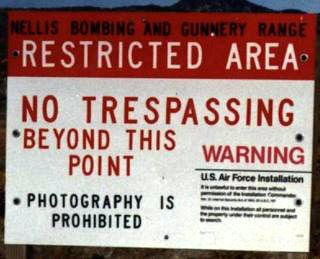 Over the years, the CIA, U.S. Air Force and aerospace company Lockheed Martin have all used Area 51 as a staging ground for test flights of experimental aircraft (a.k.a. “black aircraft”). According to documents declassified in 2007, in the 1950s and 1960s Area 51 was home to a top-secret Cold War-era program known as Oxcart, which aimed to develop a spy plane that would be undetectable in the air and could be used for information gathering missions behind the Iron Curtain. The result was the Archangel-12, or A-12, which could travel at speeds of more than 2,000 miles an hour and take clear pictures of objects on the ground from an altitude of 90,000 feet. Other well-known aircraft tested there include the A-12’s successor, the SR-71 Blackbird, as well as the F-117 Nighthawk stealth fighter. From the ground, such experimental aircraft traveling at Mach-3 speeds undoubtedly resembled some people’s idea of what alien spacecraft would look like, helping to explain why so many people reported UFO sightings in the skies above Nevada over the years. Such sightings—along with the secrecy surrounding the Groom Lake site—fueled the rumors swirling around Area 51, and helped create the air of mystery it retains today.

R
Robert Joseph Hallick.
01/19/2018 08:40
Extremely loud communications in my house you should record a mile perimeter
Reply
R
Robert Hallick Barrack Obama
12/23/2017 07:27
I need Stealth Assistance check full history of communication why im on food stamps because of pa.
Reply
C
Cool guy
09/18/2016 07:34
This was one of the best videos on here, it was a nice design for a ship, well done.
Reply